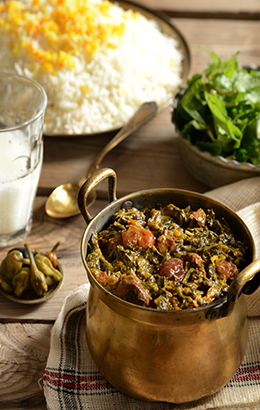 Food, in addition to being the first and most important human need, represents the culture, tradition, ethnics, customs, climate and life style of a specific region. Due to the rich ethnic, cultural and climatic diversity of our beloved Iran, there is a great variety of food in Iran; almost every region has its own local food. Wherever you are in Iran, what you will never been deprived from, is gourmet and delicious food. Persian cuisine is ancient, varied and cosmopolitan

Whilst travelling around Iran you are sure to come across a stunning variety of culinary delights. From traditional stew dishes to succulent kebabs and heartwarming soups, each region has something to offer. The variance in ingredients and dishes is partly owed to the diverse climates which exist across the country, resulting in only the richest of ingredients that are used for cooking.

Where to find a good place to eat?

The secret is that the best restaurants don’t need advertising and are sometimes hidden behind non descriptive doors, in cellars or the back of dark alleys. Iranians know where to go and will be happy to show you where their favorite restaurants are and what their most popular Persian food is.

Persian food is delicious and can be an essential part of your experience when travelling to Iran.

Here is a breakdown of some of the top must-try traditional dishes for you – Noosh-e-Jan! (Bon appetite)

Also known as ‘Abgoosht’, this meat and bean broth dish dates back hundreds of years. It is essentially a stew made up of lamb and chickpeas with a tomato base. It is usually served in a stone dish called a dizi – hence the name.

Another heartwarming, traditional dish which is generally served in the winter is the soup dish Ash Reshte. Hearty and delicious, this soup is made from chickpeas, beans, noodles and plenty of herbs.

Khoresht Gheimeh is a beef and split pea stew made with dried limes and cooked in a tomato base, usually served with fried potatoes on the top. In the month of Muharram, a holy month in the Iranian calendar this dish is cooked and served on the street to those in need.

Fesenjan is an iconic dish dating back to the Achaemenid Empire in 515 B.C. Made from walnuts, pomegranate paste and chicken or duck or lamb, and served sour or sweet. It is common to spot it among the food often served at a wedding ceremony in Iran. At the ancient ruins of Persepolis, archaeologists discovered a tablet detailing the ingredients used to make Fesenjan, making it one of the oldest loved dishes.

Made from lots of herbs, kidney beans and lamb, this dish is typically served with rice and is another very popular and must-try dish in Iran.

Usually eaten as a dip or side dish, Kashke Bademjan is made up of smoked aubergines and ‘Kashk‘– a yoghurt whey used commonly in Iranian cooking. This dish is usually served with a delicious Iranian bread known as Lavash. 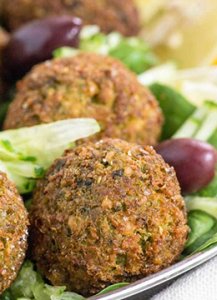 This traditional dish is one of the specialties in Iranian cuisine. As the name reveals, this Iranian dish is originated in Tabriz, the capital of East Azerbaijan province, northwest of Iran. What makes Koofteh Tabrizi one of a kind among all other Iranian foods is not just the ingredients but the way it gets prepared and cooked. Koofteh Tabrizi is a super meatball stuffed with dried fruits and berries, also a variety of nuts.

Ghalieh Mahi (Persian Fish Stew) is a famous and spicy stew recipe from southern province of Iran (Khuzestan province). It is a combination of fish, herbs, garlic and tamarind paste that would be served with Persian Rice.

One will have no difficulty finding kebab in Iran. There are plenty of restaurants serving kebab in all kind of varieties served with a huge platter of rice and butter. To help you choose your kebab I will describe some of the options available:

Chelo kebab: chelo is steamed fluffy saffron flavored rice served with any of the kebabs below.

Kebab koobideh: the most famous kebab in Iran and what they will most likely serve you as a foreigner ordering kebab without specifying what type you want. Koobideh is lamb, beef mixed with onions placed on a flat stone and mashed with a wooden pallet.

Kebab Barg:  It is a thin barbecued meat of beef tenderloins with onions, saffron and olive oil.

Kebab Soltani: Kabab Soltani means a king’s meal and is the combination of one kabab barg and one kabab koobideh

Kebab Torsh: This speciality from Gilan is beef kebab marinated in a paste made of crushed walnuts and pomegranate juice

Liver kebab: Kebab made from liver (jigar). Absolutely delicious. For the more adventurous foodies, there is also kebab made of beef heart (del), kidneys (gholve), and pure fat.

Shishlik meaning skewered meat is originally made of lamb and popular in many countries. In Iran, it is grilled meat with bones, previously marinated in onion, olive oil and saffron. You can find the best Shishlik in Mashhad.

One might think of Indian food when heard of Beryani; but Isfahan’s Beryani has nothing to do with this. Instead it is a dish made of minced sheep’s lungs and intestines. They serve the meat in a rolled bread with some fresh herbs.

In Iran you will eat a lot of rice. Luckily Iranians have perfected the art of making it. Rice is often flavored with saffron and served with some butter. Iranians love it when the bottom is crispy. It is called Tahdiq and considered to be the best part of the rice. Some even make potato Tahdiq by adding a layer of sliced potatoes at the bottom of the pan.

Iran’s best rice dish is Tahcheen. Rice is mixed with yoghurt, eggs, saffron and chicken and then baked in the oven.

This rice dish is a specialty of Shiraz. It is rice with cabbage, herbs and meatballs. This dish is quite tasty due to the herbs.

Regardless of what you prefer to eat and when you prefer to eat it, allow your curiosity to guide the culinary dimension of your trip through Iran. You’ll likely find yourself amidst conversations you’d never imagined having while traveling there. Noosh E Jaan