The identity of any country can be found in the context of the culture and history of that ancient civilization, and this identity is part of an ancient story of the collaborations between the arts and culture of the people of that region. Iran, through its ancient civilization, is considered to be one of the cradles’ civilization in the history of the world. The manifestation of Iranian civilization can be found in the Iranian ancestors’ works of art, discovered in the remains of ancient tombs, palaces, mosques, etc. Iran’s handicrafts is one of the most significant artistic industries that has deep roots in the culture and history of this land. Iran’s craftsmanship is wide-spread in terms of diversity and is at the forefront of all countries in the world. There are different opinions about the definition of handicrafts, but if we want to give a short and specific definition, one can say: “Handicrafts are part of the traditional arts that blend the supreme art of art with industrial techniques and skills, Reproduction in the context of individual and social life “. Iran, this beautiful country encompasses one of the richest world’s art heritages. Persians are considered as the first nations using geometry, mathematics, and even astronomy in their arts and architectures. Iranian people are true artists who are master in all fields such as music, performance, architecture, painting, carpeting, weaving, woodcarving, engraving, inlaid working, pottering, tile working, and even writing and calligraphy, etc.

The history of handcrafts in Iran dates back to the distant past, when humans began to use stones to meet their needs. These industries have been around for centuries, and their roots have to be found alongside the settlements and works of the original inhabitants of the Iran plateau. Iran had many handicrafts in its ancient period, many of which remained in museums and archaeological excavations. In after Islam Iran, from the period of the Samanids until the end of the Seljuk period, Iran’s handicrafts, combined with the principles of Islam, have gained a great deal of masterpieces of Iranian art and architecture.

Handicrafts are a combination of art and industry, which are presented in the form of an independent and indigenous area. To a large extent, these industries represent the culture and industry of people and their talents and skills. Crafts produced by the product are thought, feel and hands of the producer. Therefore, these industries can be considered as a reflection of history and civilization, and the mirror of the whole of the mind, taste and art of each region.

Carpet or rug weaving can be considered as one of the main handicrafts of Iran which has an influence on economic of the country. This commodity is famous worldwide. It is certainly the manifestation of Persian culture and art. It dates backs to 2,500 years and is rooted in the culture and customs of its people and their instinctive feelings. Weavers mix elegant patterns with a myriad of colors. The Iranian carpet is similar to the Persian garden: full of floras, birds and beasts. The colors are usually extracted from wild flowers, and are rich in colors such as burgundy, navy blue and accents of ivory.

Ghalamkar is another handicraft. It is a usually cotton fabric patterned by wooden stamps. Termeh is also another handwoven cloth popular in Yazd province. Termeh is considered as a traditional design of Iran. This craft usually is light red, jujube red, green, blue, orange and black.

Among wood works and wood carvings marquetry or Moarragh and Inlaid working or Khatam can be mentioned. These arts date back to Safavid periods. Inlaid work (or Khatam as it is called in Persian) means wood decorating with multiple regular sides. Khatam is made in different sides five, six, eight, and ten sides. At present, the six sided Khatam is the most prevalent whose materials are cut and wrapped or pasted in equilateral triangle form with string or glue.

Another artwork rooted in Isfahan is Minakari. It is the art of enamel working and decorating with colorful and baked coats. It is divided into enamel painting, chess-like enamel, and cavity enamel. Mina refers to the Azure color of heaven. Furthermore, red, green, black, blue, yellow, etc. are also used in coloring. However, the background and the prominent color is azure.

Pottery is another art. Its history dates back to ancient time. The first earthenware was very simple. However, designing them started from four thousand years B.C. It became delicate and decorated by engraved designs.

Tile working is also a famous art in Iran began about 1200 A. D. Most of Persian structures specially the historical ones were decorated with beautiful tiles representing Persian art. This art also can be considered as an industry.

Silverwork; The silverworks discovered in Sialk mounds belonging to the fourth millennium BC indicates that the people of this area of Iran had been familiar with silver and making handicrafts with. The outstanding works of masters from Khorasan province indicates the highlight of silverwork art during the Seljuk period.

Iranian painting, being a blended word indicates some sort of painting which has appeared during centuries in the land of Iran. This kind of painting, called miniature by the western researchers and scholars, has a deep and fruitful history. Iranian painting being considered as a practical art among the pen works includes an exclusive extent. Sub-divisions as various schools in this sort of painting like Illuminating, Tashiir or adorning, animal and I ‘ flower paintings around a calligraphy for more beautification, and different performing methods

Stamping on metal originated in Ancient Persia more than 4000 years ago. For the Ghalamzani, the masters originally used copper, but now more expensive materials like gold and silver are used. The drawings are so unique and complex that at times the price of the product is formed by the work itself rather than by the expensive material. Masters use traditional patterns, birds, animals, nature, historical events, plots of famous works and other themes for decoration. Both the drawing itself and the motive depend on the master’s imagination and skill.

The process of drawing a picture is quite complex and begins with a coating the surface of the metal with a solution of resin and chalk. With a special tool, the master applies the pattern, after which the pre-applied solution is washed off, the surface is rubbed with coal and polished. After polishing, the picture glitters.

Firuze Kub is a relatively new type of handicraft, but it is connected with another story. The word “firuz” means a stone of happiness and is translated as “turquoise”. Iran is considered the birthplace of the best turquoise. Firuze kub for hundred years managed to become the most popular handicraft and country’s business card. The best masters create unique items with firuze kub in Isfahan.

Writing & Calligraphy; the significance of the art of calligraphy in works of pottery, metalwork and historical buildings is such that they are considered deficient without the calligraphic adorning. Illuminations, especially in the Qur’an and works such as Shahnameh, Divan-e Hafez, Golestan and Boustan, are recognized as highly valuable because of their delicate calligraphy alone. Vast quantities of these are scattered and preserved in museums and private collections worldwide such as the Hermitage Museum of St. Petersburg and Washington’s Freer Gallery of Art among many others.

The talented and creative spirit and of the Iranian artists and their interest in producing or better to say creating a unique piece of artistic work have caused our country to have a special and distinguished position in the production of handicrafts, and has a reputation for excellence in ranking world widely. 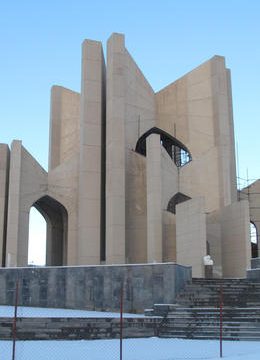