Qom is the seventh metropolis and also the seventh largest city in Iran. Qom is the capital of Qom province. It is located 140 km to the south of Tehran. The famous thing about Qom is the Fatima-Masoumeh shrine which is a highly respected shrine. Qom is the main city for religious studies in Iran. Right now many senior ranking clerics of Shia Islam live in Qom. The modern city has the largest madrasah (theological college) in the country, where students can specialize in Islamic law, philosophy, theology, and logic. It was at Qom that the Iranian army surrendered to Islamic revolutionary militia in 1979. Its theological center and the Fatima Masoumeh Shrine are prominent features of Qom. Another very popular religious site of pilgrimage formerly outside the city of Qom but now more of a suburb is called Jamkaran. Qom’s proximity to Tehran has allowed the clerical establishment easy access to monitor the affairs and decisions of state. Many Grand Ayatollahs possess offices in both Tehran and Qom; many people simply commute between the two cities as they are only 156 kilometers or 97 miles apart. Southeast of Qom is the ancient city of Kashan. 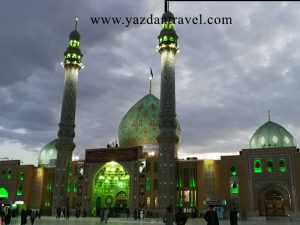 Despite having been infallible, Fatima Masoumeh is not considered one of the 14 most holy figures in Shia Islam. Yet, her brother Imam Ali al-Reza (A.S) gave her the title “Masoumeh”, which means infallible or sinless; Fatima Masoumeh is a saint because of her own holiness and wisdom. It is in fact one of Iran’s most stunning mosques. Named for a sister of Imam Reza (A.S), the geometric shapes and floral motifs of this shrine have a distinctly feminine touch, making you want to linger outside a bit longer to admire the tiles. The interior of this spacious shrine is immaculately decorated and has many notable burials on site, ranging from royalty and political figures to clerics and scholars.

This mosque has religious significance as the site where a local leader reportedly met the 12th Shia Imam. Construction is believed to have started in the mid-1730s, and the mosque has expanded over the years. The brickwork iwans, multi-colored tiles, and Thuluth calligraphy become especially picturesque at night, when floodlights illuminate the complex and give it a spiritual radiance. Pilgrims frequenting this mosque write their wishes on a piece of paper and drop it down the mosque’s well to have it answered by the 12th Imam.

Some other sights to visit in Qom are:

National Kavir Park it is highly recommended to visit this place by a local leader.

& don’t you forget to try especial sweets in Qom that would be a big loss.